Sea level rise poses an increasingly grave threat to coastal energy facilities and communities during the course of the next several decades, with some impacts already evident, according to testimony delivered Thursday before a rare Senate hearing on climate science.

The hearing, held by the Senate Energy and Natural Resources Committee, focused on the challenges posed by sea level rise, which is one of the most visible manifestations of a warming planet.

“Sea level rise takes the current level of vulnerability and multiplies it,” said Committee Chairman Jeff Bingaman (D-N.M.). “When sea levels rise, the storm surge associated with extreme storms gets even worse, and even an average storm can have above-average consequences.” 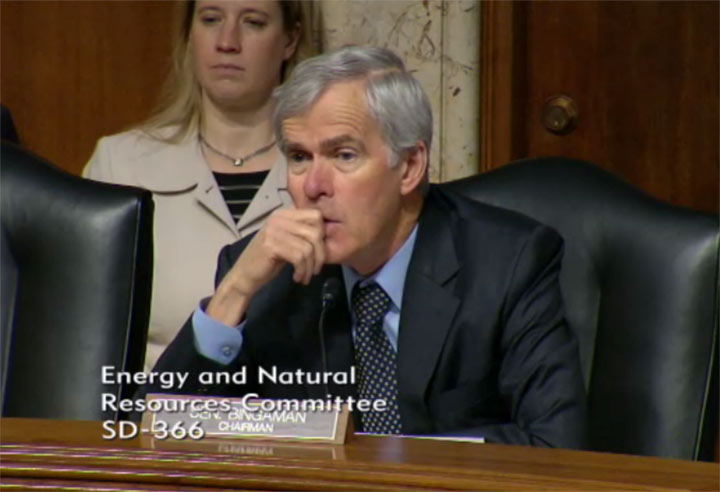 Although Chairman Bingaman said he hoped the hearing would help restart “a national conversation” on climate change, the hearing instead may have served to highlight the continuing partisan divide on global climate change. While there were five Democrats in attendance, just one Republican — ranking member Lisa Murkowski (R-AK) — participated in the hearing, a fact not lost on Minnesota Democrat Al Franken, who called climate change the proverbial “elephant in the room.”

The panel of witnesses, which included Climate Central’s Ben Strauss, emphasized that coastal communities are already dealing with the impacts of sea level rise, and that federal actions that can support adaptation and mitigation efforts should be considered.

According to a new report Climate Central released Thursday, by 2030, storm-driven floods reaching 4 feet above the high-tide line will occur twice as often as today. The report is based on projections contained in two scientific papers published in March in the journal Environmental Research Letters and online, where interactive coastal flood risk maps are posted.

Strauss presented the committee with data showing that there are nearly 300 energy facilities in the U.S. that are situated less than 4 feet above sea level, and 4.9 million Americans who live below the 4-foot mark, making them extremely vulnerable to flooding from a combination of sea level rise and storm surge.

The majority of the vulnerable energy facilities are located in Louisiana and coastal Texas.

In total, global average sea levels have crept upwards by about 8 inches since 1880, and projections show that there is a high likelihood that they will increase by at least another 8 inches by the middle of this century.

According to Waleed Abdalati, the chief scientist for NASA, this projection is “probably at the low end” of recent forecasts.

The main causes of sea level rise are thermal expansion due to warming ocean temperatures, since seawater expands when it warms, as well as melting polar ice sheets, which add large volumes of water to the oceans each year.

While global average sea level rise is important, it is the local sea level that really matters to communities and operators of coastal energy facilities, such as oil refineries and nuclear power plants. And local sea level rise will vary considerably, based on factors such as the sinking of coastal land, and the shape of the sea floor along the coastline.

Senators and witnesses expressed concern about the risk exposure of existing coastal energy facilities, including nuclear power plants. Because they require water for cooling purposes, many of the approximately 104 nuclear power plants in the U.S. are situated along the coast. Florida even has two nuclear plants located on barrier islands, including Turkey Point, which was affected by Hurricane Andrew in 1992.

“There are known vulnerabilities of current energy infrastructure to the conditions in which they exist today,” said Anthony Janetos, director of the Pacific Northwest National Laboratory’s Joint Global Change Research Institute in College Park, Md. “These vulnerabilities are being increased as sea levels inexorably continue to rise.”

There was agreement that the federal government needs to do more to support climate adaptation efforts nationwide. Sen. Maria Cantwell (D-Wash.) said she plans to introduce “WeatherReady” legislation to support severe weather-related preparedness efforts, which could include climate change adaptation measures.

“We can’t sustain this level of sea level rise without a plan,” she said. “We need a plan.”

Murkowski called current federal flood maps, produced by FEMA, “lousy” and out of date, and criticized the lack of foresight on the part of federal agencies to help prevent disasters. Instead, she said, the government seems to only be there to swoop in after the fact and help clean up.

New York City faces a wide array of sea level rise-related challenges, including the vulnerability of the transit system to coastal flooding. Adam Freed, deputy director of New York City’s office of long-term planning and sustainability, said the current FEMA flood maps, which are used to help set insurance rates and define a 1-in-100 year flood, are out of date and need to be redone in a way that includes sea level rise. Freed said that private insurers are pulling out of areas that are beyond the 100-year-flood zone in New York City, because they recognize that sea level rise is causing storm surge risks to “migrate” farther inland.