Surging Seas Mapping Choices is an interactive global online map that allows anyone to search for a global location and visually compare the local potential consequences of different emissions and warming scenarios. Users can view the long-term sea levels that different pathways could lock in and download map images or embed the map. Our goal is to offer a new way to essentially see the future, for every global city and postal code, and better understand what different emissions or warming levels ultimately mean. The sea level rise we map may take centuries to play out, but we set it in motion today.

Global Mapping Choices is based upon Climate Central-led research published November 9, 2015, which in turn builds upon our peer-reviewed scientific research published October 12, 2015 in the Proceedings of the National Academy of Sciences of the U.S.A..

New findings from these studies include: 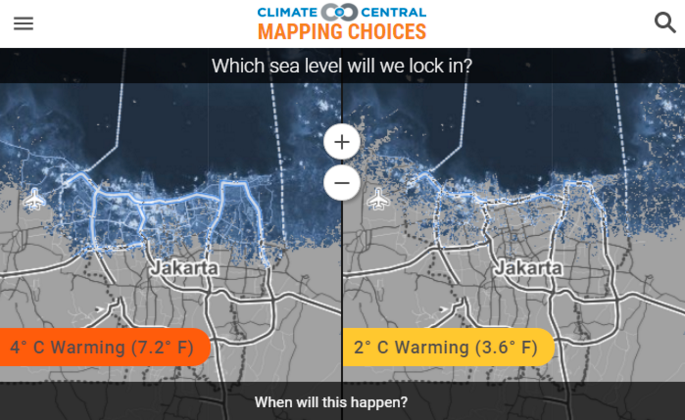 Science Behind the Tool

Mapping Choices is based on peer-reviewed scientific research led by Climate Central and published ​in the Proceedings of the National Academy of Sciences of the U.S.A. A separate report details mapping methods for areas outside of the U.S.

Some research has suggested that the West Antarctic Ice Sheet has begun an unstoppable collapse, but the evidence is far from conclusive. The maps in Mapping Choices do not assume inevitable West Antarctic collapse. If collapse has in fact begun, all locked-in sea levels would be higher than shown. Carbon emissions levels would still influence all outcomes. These scenarios of inevitable collapse are detailed in the PNAS paper.